Forbes, a business magazine, publishes a surprising number of articles on science topics that are not half bad. These are generally (always?) attributed to Ethan Siegel, and his recent contribution in the perennial struggle to counter human doofiness was devoted to string theory. He had words of praise for the theory, but there was a soupçon of eulogizing to the whole thing.

Naturally Peter latched onto the article. More versed on the subject than Ethan, Peter was able to diminish the praise, and point out that no further nails were needed in that coffin.

I’ve been following Peter’s blog (Not Even Wrong) for years. During all that time he cogently made the case that the emperor had no clothes. It was great fun. But then, as we all know, the LHC finished doing its smashing, and found nothing new. Well, in particular, it found nothing that anyone other than the most deluded optimist could interpret as supporting string theory. This gave the emperor a bad flu, and the poor fellow died. The naked corpse still sits on the throne, but it no longer pontificates and is largely ignored.

What to do? Should Peter change his blog title from “Not Even Wrong” to “Not Even There”? I mean, really … Forbes? It provided but the most meager excuse to post a blog in response. Peter, it would seem, once a Samurai, is now a Ronin – at least as it relates to string theory. Still, string theory is not the only idea that is/was not even wrong. There are many other pretenders to the throne in similar states of advanced dishabille.

Voice in the wilderness

Well, speaking of titles, I chose to call this blog “Three Spheres to Rule Them All” for a reason. That it exists at all has a lot to do with “Not Even Wrong”. Peter occasionally struggles to keep comments added to his entries on topic. He has rules, and they are enforced. They are reasonable. Violations simply do not appear; they are expunged. Many of my comments have met this fate, although half of those were submitted knowing full well they would be rejected; sometimes I just feel naughty, and poke the bear.

Still, starting my own blog was in some measure a response to rules I found it difficult to abide. In my own blog I could say whatever I wanted to, even to the point of extolling the virtues of a particular set of theoretical ideas, viz., my own. And I could do it without the onerous burden of accepting or rejecting comments. All comments are by default rejected. I don’t handle criticism well, and I don’t want to see it. I handle praise only marginally better. And, truth be told, I don’t really care if anyone reads this blog. As I get older, I write more, but mostly just to and for myself, a most appreciative audience; kind of a Gandalf thing going on there.

Humanity is capable of all sorts of heinous behavior, from the hanging of the decapitated corpses of one’s enemies on the underside of bridges, to the less egregious, and somewhat less annoying, Tammany Hall style corruption into which unfettered elites invariably slide if there is no equally powerful countervailing … well, Animal Farm anyone?

TP elites have been Tammany Hall for the last several decades, and many of my blog entries have excoriated their narrow focus and wrong thinking. But, so, ok, we’ve covered that territory. It’s time to …

Unlike Peter, whose leery attitude to the mainstream arises from a highly educated understanding of their foibles, I base my negative assessment of the last 40 or so years of TP theorizing on one simple idea: my ideas are fundamentally correct – in their essentials – and ideas at odds with mine are therefore wrong. As I mentioned somewhere back in the depths of this blog site, the fact that those 40 years of theorizing came up empty was to all extents and purposes a prediction of my own work. Let’s talk about this.

I’m going to coin a new word. I can’t help myself; it’s really neat. So, in mathematics there are Ur-objects, which I’ll call, Ubjects (See? Neat, huh?); and there are tools (let’s get crazy and call them Mools (mathematical tools)). Ubjects are things that in some sense exist without the intervention of sentient creatures – should the universe ever produce any. Prime numbers and parallelizable spheres are examples of Ubjects. Mools are things invented to help the inventors better understand Ubjects. Ubjects are objective – invariable from species to species; Mools are subjective – and should we ever encounter an alien source of Mools, differences in approach will likely give rise to schisms and intergalactic wars. (The search for ET, as a consequence, should be squashed, and that posthaste.)

As regards my own work, the underlying Ubjects are the (connected) parallelizable spheres, which exist only in dimensions 2, 4 and 8 (so the spheres have dimensions 1, 3 and 7). I am thoroughly convinced that there exists some (spinor) field theoretic Ur-reason that these spheres are an essential part of the design of our universe – any universe. I have only the vaguest notion how one would go about proving this, but, hey, give me a break. Hundreds of some of the brightest people on the planet spent decades mucking about with string theory, so … you know, give me a break.

Associated with these Ubjects – the parallelizable spheres – is an equally finite collection of Mools – the Hurwitz division algebras: C (complex numbers), H (quaternions), and O (octonions). The quantity and importance of the mathematical concepts to which these algebras give rise and/or link can not be exaggerated. They are extremely resonant.

Ok, so, the Pauli algebra, from which is built the Dirac algebra, is isomorphic to P=C⊗H. You can get an SU(2) doublet of Dirac spinors by stacking a pair of elements of P, and voilà, all the algebraic elements with which to build a U(1)xSU(2) Yang-Mills theory are there and ready to be exploited.

So what happens if you start from T=C⊗H⊗O instead? In this case the expanded collection of elements is ready to be turned into:

In my first book I built the various Lego bits into a semi-coherent model, essentially the Standard Model. In my second book, I threw a bunch of the Legos on the floor for people to either play with, or step on barefoot in the dark on the way to the kitchen to have a midnight snack. Subsequently I wrote a paper that I consider my pièce de résistance (there is also a longer, fuller version). From all this one gets:

That last bit, if it has escaped your attention, provides an explanation of one of the biggest mysteries in TP. Pop sci articles, like this one, will not mention my work on this mystery. But then, if a pop sci journalist asks mainstream theorists their thoughts on a maverick idea X, the mainstreamer will provide a dismissive response, with an underlying threat to withhold their wisdom in future should the journalist even mention idea X. Sadly, this is understandable behavior, and it is difficult to fault.

The list of niceness arising from T is longer than this, but I’ve begun to forget a lot of it, so screw it. Anyway, it is inconceivable that all of this is mere coincidence. I mean, really, don’t even try to conceive that; you’ll hurt yourself. Some of the most important and resonant Ubjects in all of mathematics give rise to Mools from which the Standard Symmetry, multiplets of Dirac spinors, and all the rest … I mean, sure, it could be coincidence. Nature might be that stupid and perverse. Sure.

Not included in the model building, as I envisioned it, are:

> SUSY;
> Axions;
> Wimps and any other of the panoply of particles and fields people have predicted, but for which there is no evidence.

And that’s why the fact that 40 years of efforts to find the Next Big Thing, and win the Next Nobel Prize … the fact that all that came up empty is not at all surprising to me. And it’s why I am now perfectly content to sit back and watch the future of TP unfold as a nonparticipant. I do not expect to be surprised. Well, there’s always quantum gravity, which may yet surprise (but not without T); and astrophysics has still more secrets, I’d wager, if it can avoid talk of wormholes (which is just goofy in the absence of a coherent theory of quantum gravity).

So, I’m not sure I’m going to contribute many – if any – more blog posts devoted to TP. I don’t have the depth of knowledge of Peter or Sabine. Really, I’m only an expert in ideas to which I gave rise, and as they are not integral to any of the directions in which mainstream TP is moving itself, I’d only embarrass myself if I tried.

All the generally unflattering attributes that define us as humans, however violent and/or underhanded, can not alter the reality of Truth, only its perception. Physical Truth is immune to prejudice and self interest. It is what it is, and even if it is in the interest of a coterie – or even cabal – to create a fiction at variance with the Truth, as a means of maintaining influence and power, in Science, far more than in politics, … well, in politics, if an idea lives long enough, it becomes perceived Truth. In science, an idea that varies from Truth will always be fiction. Although this may never be understood. Unlike in politics, you can not change the context and make it true.

In my last blog I discussed the anime, “Girls’ Last Tour”. Recently I shared a further thought on it in an email (a fitting way of ending this blog entry):

“The anime is a work of art on several levels.  Visually, certainly, but the story of two doomed tweens who use each other’s company to stave off gloom is enchanting.  And for me the most magical moment comes when they encounter a now defunct art museum.  They aren’t 100% sure what it’s all about, but there is a replica of a cave drawing, essentially humanity’s first work of art, on a wall.  One of the girls draws, and she pins her last drawing – humanity’s last work of art – next to humanity’s first.  Then they wander off, and neither work will ever be seen again – at least not by a human.” 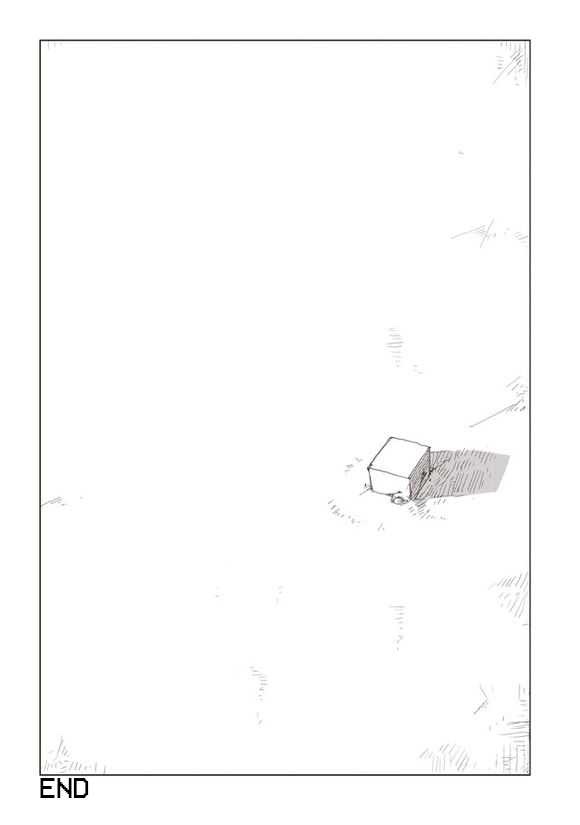