Like addicts recognizing the need to correct misbehavior, but unable to do so – unable to break the constricting addiction, or even anymore able to imagine what that might be like – the theoretical physics elite occasionally recognizes the need to introduce ideas from the wastelands, but then they get immersed in discussions of the intricacies of QFT, or the injustice of SUSY’s failure, or [long list of 40 year old debates and failures]:

Thus the comforting bed of familiar old ideas,
it does make uninspired NPCs of them all,
And thus the native hue of resolution
Is sickled o’er with the pale cast of ennui.
And enterprises of great pith and moment —
With this regard their currents turn awry
And lose the name of action.

But I may be in error. Other than Peter Woit’s blog, and the occasional email from friends and strangers out in the broader world, I am not really sure what’s going on the the cranium of your above average TPer … well, there is the Boston Area Physics Calendar, which gives the impression that the vast majority of theorists have moved away from HEP. And PW continues to blog about what he encounters in the media, strongly filtered by his expertise in QFT, a filter used by virtually everyone else who counts, in the estimation of everyone else who counts, as it were. One of the readers of Peter’s latest (as I write) commented:

That is: “It is dangerous to be right where accredited men are wrong.” I absolutely love this quote. In its spirit I offered the following comment:

This may mean: “It is also dangerous to be right a long time before the right time, but much sadder.” This is what a few years of Duolingo French will get you. Maybe I should have used “longtemps”. But anyway PW didn’t like it, and for reasons with which I can’t cavil: the comment was self serving, directly relating to my own work, which he recognized. Such comments are not allowed. Still, I was pleased with it, and … whoa … I have my own blog, which is frequently self-serving, and I don’t really care how often I serve myself.

Moving on. I get most of my news online, and much of that with the Flipboard app on one of my many Apple devices. I subscribe to a variety of different feeds, like Travel, Science, Physics, Science Fiction, Humor and Memes. Animation too; mustn’t forget animation. And I’ve created a few of my own feeds: collections of stuff I find insightful, fascinating, and/or entertaining. I use a pseudonym.

But let’s focus here on Travel. And let’s recognize that article writers have to make a living, and the majority of them cut corners to get things out as quickly as possible. This often means that when they see one writer use an idea, they frequently glom onto it, becoming a vector in its viral spread. And the shared idea that irks me a lot (maybe not the most, but a lot) is the Bucket List.

This all started, as I recall, with the eponymous 2007 film about some old geezers (like me) who had lists of things they wanted to do and accomplish before kicking the bucket. (And here I am reminded of something that thoroughly astonishes me every time I think about it: the iPhone – and so smart phones in general – was introduced in 2007; this is, like, yesterday, right? Yet it feels like 50 years ago, so great and transformative is this technology. It has dilated time, dude! So, yeah, WTF.)

The travel articles … wait; let me find one … just a moment … just a moment (click here if you’re not HAL) … ok, back. That didn’t take long. But I found an article guilty of this transgression: “Bucket list worthy places in Japan’s scenic northeast”. But why is this a transgression? Well, of course, it may be so only to me. Ok, it is only me … maybe.

I recently read what turned out to be an autobiographical graphic novel, except it wasn’t really a novel, then, was it. It was called, We Saw Scenery, the title deriving from the parents of the author taking her on childhood trips where scenery was seen. Scenery can be cool, and when you’re a vapid young Millennial or Z, it’s an essential accoutrement to your need to plaster your face on the intertubes, with scenery in the background, at which you may never look directly. But I’m a colorful, lively and exciting (all antonyms of vapid) elder Boomer, and if I photograph scenery, the scenery takes up 100% of the photo. Still …

After a point one has to wonder, what is the point? Were I to go to Japan’s scenic northeast, in what way will I die more contentedly having done so? Of course, my attitude may be a little soured by the fact that I have a terminal illness, so anything that reminds me of that – like a 10 foot long bucket list – is moderately annoying. Scenery is nice. I like scenery. But as I have mentioned once or thrice in previous blogs, if there are not nearby cafes and interesting people walking dogs, well, I’m just not sure. Here’s my bucket list, in entirety:

Sit in cafe and watch world go by;
Read;
Write;
Make friends with every encountered dog willing to be friendly.

Yesterday at the beach I encountered a young black Labrador retriever wearing the cone of shame. I asked the owner why. She said he’d recently been “fixed”, and was still healing, so the cone was there to prevent him licking his greatly diminished privates. I got down on my knees in the sand and said some commiserating things to the poor guy, and I reached into the cone and scratched his ears, behind his ears, and everywhere else in the cone. His reaction was basically this: “Uh, excuse me. This is a little forward of you. What are you doi … oh, gods, that feels so good; you know, I can’t get to those spots myself because I’ve got this ridiculous piece of headwear, and, oh, yeah, the neck, quite itchy; I am so so grateful.” If you’re a dog person, it’s not hard to understand what they’re saying. And if you don’t understand, then you could still be a dog person, but not a person dog, like me. 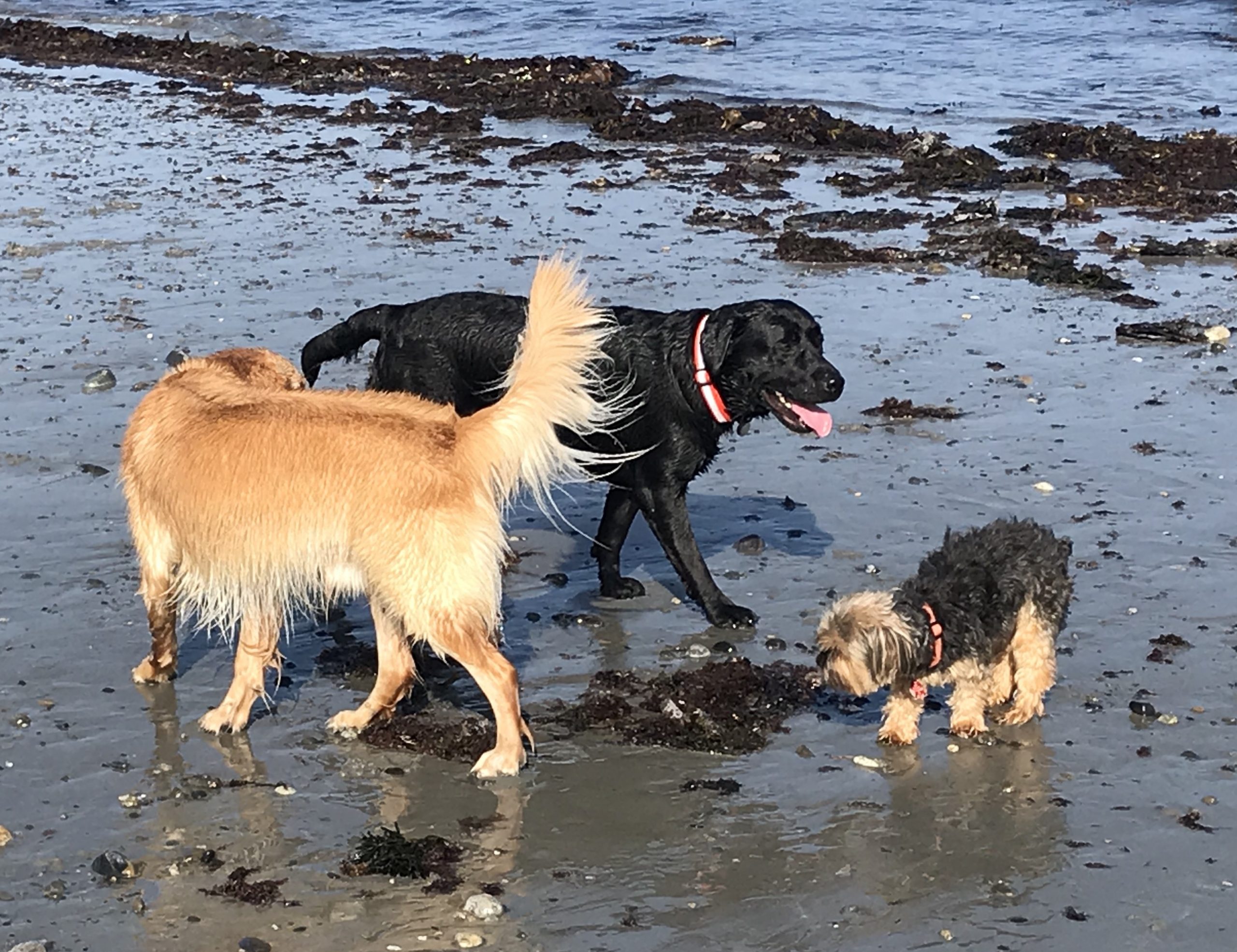